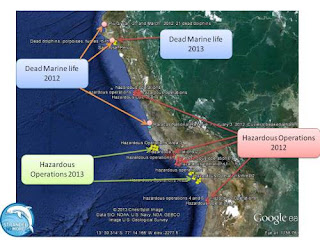 NOTE FROM JEFF:  It seems obvious to me that all the hullabaloo with Sea Shepherd and the 'clearly evil Japanese whalers' is no more than 'reality tv' on a large scale, scripted by the producers of 'Whale Wars', sponsored by Animal Planet and Discovery Communications, who also hosts the Military Channel, and designed to distract the public from what is really going on with real threats to marine life globally. These 'made-for-tv-dramas' make lots of money for all parties involved, but not only fail to 'save the whales' but add a tremendous amount of anthropogenic noise and intrusion into the southern ocean. Cetacean strandings and mass die-offs of marine life are increasing exponentially all around the world, indisputably linked to military-industrial activity, yet Sea Shepherd and other 'environmental capitalist' organizations NEVER even mention these real global threats. The really scary part is that the beings who we discover on the beaches or floating in the water represent only a tiny fraction of the total number who were killed...possibly less than 10%. Last year around this time a MAJOR die-off of cetaceans occurred in this exact same area off the northwest coast of Peru.  This area is home to one of the largest off-shore hydrocarbon deposits on the planet; consequently a massive amount of off-shore geophysical exploration is going on involving seismic testing technologies as well as military operations. Last year a joint exercise involving surface vessels and submarines was going on between the US and Peruvian navies when the mass-stranding/die-off occurred. This pattern of events has just occurred off the west coast of the UK and is going to be happening more and more in the territorial waters of Australia and New Zealand as military-industrial ecological war-machines like Anadarko Petroleum expand their operations in the middle of some of the world's densest populations of cetaceans. This is EXTREMELY BAD KARMA for all entities pretending to be 'human beings.'

The pattern in Peru is EXACTLY the same as what has been happening in New Zealand: anomalous earth-quake activity and unusual strandings of cetaceans in the presence of 'seismic exploration' vessels as well as 'radio frequency installations' or technologies that could easily be integrated into a 'HAARP-based' technetronic weapons network.

That part of Peru has had at least five earthquakes in the past two weeks, including a 4.8 on 11 February, two days after the dolphins began to strand at Chiclayo. This is EXACTLY like what happened in the Christchurch area only two days before the February 22 2011 quake, when a large pod of dolphins became disoriented near Thames and were successfully guided back to sea by thoughtful people.

In addition, an extremely large 'ionospheric research facility' exists a few hundred kms inland from Chiclayo at Jicamarca. This facility, operated by Cornell University, is VERY MUCH like an older version of HAARP. They call it a 'radio-telescope' and indeed, even HAARP can be used for 'listening'. But ANY radio receiver/antenna array can function equally as a transmitter; moreover, it's well known that most if not all of the world's radio-telescope installations function at least in part as ionospheric research instruments, beaming radio/micro-waves in exactly the same way that HAARP does.

We could not shake off this feeling of deja vu when we’ve heard about this brand new die off  in Peru happening nearly exactly the year after the one in 2012. Not only it happens roughly at the same time it is happening in the same area!! We hate to say it once again but we found hazardous operations areas plus BPZ Oil Company was again possibly doing 3D seismic surveys (and maybe other companies too, see below).  Last year die off was linked to seismic surveys (see our blog) but later we also found hazardous operations that could also be a culpit. Here is what we found out so far re this year:

The area includes San José, in Lambayeque (see map). 90 animals were found dead including:
18 turtles, 22 sea lions , 8 dolphins , 16 porpoises , 22 pelicans and others.
IMARPE again investigates which is a guarantee that it will be another “unsolved mystery” (link and link)

Here is what we found so far:
1. Two areas of “hazardous operations”:
a) Area 1: January 29-30, 2013, operations daily
b) Area 2: January 29-30, 2013, operations daily
c) Area 3: February 7, 2013
Now, we do not know what these hazardous operations included exactly, but they were likely involving some military testing.
2. Some evidence that BPZ was active in its famous Z-1 block. We could not find the exact dates so far, but indirect reports indicate that they might have been doing 3D seismic surveys:
a) Article from February 5, 2013: “Currently, the company is focused on optimizing oil production in the Corvina field in Block Z-1, which includes setting a new drilling and production platform (the CX-15) in the field and implementing an offshore drilling campaign for this platform. The company has also embarked on completing a three dimensional seismic survey in Block Z-1 to assess whether it is viable to conduct additional exploration and development activity within the block. This also includes the acquisition of offshore seismic data so as to better understand the characteristic and potential of its fields within Block Z-1.” (link)
b) Article from January 24 2013: “There is an increase in exploration activity in the region of Block Z-34. In Block Z-38 (north from Block Z-34) operator Karoon, an Australian company, has recently announced a program to drill two wells with an option of one more by late 2013 early 2014. The Directors believe that Karoon’s drilling campaign, if successful, should add value to Block Z-34 as the block is in a similar geological environment as our block. In addition, companies with assets east of Block Z-34 (Savia), north east (BPZ /Pacific Rubiales) and further south (Savia and SK Energy) have announced aggressive exploration and development plans.” (link)
c) Article from January 22, 2013: “Phase II of the original 1,600 square kilometer seismic acquisition project on Block Z-1 is now complete.” (link)
So what does this all means? It means two things:
1. The die off is again most likely caused by anthropogenic activities (military, Big Oil or both)
2 This die off is similar to 2012 die off
3 It will be hushed down and not investigated like the 2012 one
4  USA should pay attention, this is what will be happening on the US shores very soon.

Check out the map that could explain how carcasses could end up in Lambayeque:

Peru is located in seismically active area, but see for yourself , there have not been any significant or notable offshore quakes in last 30 days, except for a few small ones,  including 4.7 one happening 86km SSW of Acari, Peru. Now what is interesting is that hazardous operations also took place on Jan 30 not that far from this place.

Approximate locations of seismic surveys area that could have been happening prior and during Peru’s marine life die off. The locations are approximate and for reference only as we do not have actual data, tracks and coordinates.

Note that in 2012 there were more operations, larger area and the die off was bigger.

The Bottom Line:
This needs to be INVESTIGATED. Had it been investigated last year, this year die off could have been prevented. This cannot go on like it does, it is like a bad dream repeating itself over and over again.
Posted by Jeff Wefferson at 11:39 AM