U.S. NAVY/COMMERCIAL WHALERS vs. THE WHALES 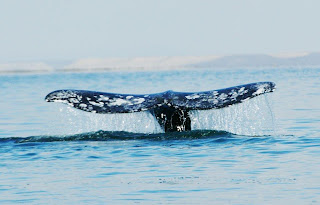 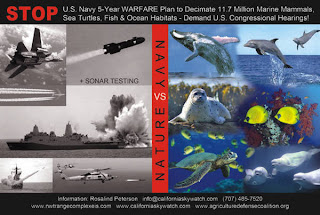 Our oceans are under assault from a wide variety of sources. The worst of these are the U.S. Navy Experimental Warfare Testing Programs which were initiated in 2008, and will continue in the Atlantic, Pacific, and the Gulf of Mexico over the next five years. In the U.S. Navy Sitemap Section of this website you will find the U.S. Navy Environmental Impact Statements, a Navy map of all their five year warfare testing areas, notification about those that have already been implemented in Southern California, the Mariana Islands, and Hawaii in the Pacific, and those in the Atlantic Ocean and Gulf of Mexico. Many of these 5-Year warfare testing program will be started in the near future unless the public says "NO"! (The U.S. Air Force is also using the Gulf of Mexico for bomb blast testing.) The one that is proposed for Northern California, Oregon, Washington & Idaho is being opposed by many groups at this time and this 5-year warfare testing program could start at any time here in Northern California.

Letter from several Senators including Senators Barbara Boxer and Feinstein to NOAA-June 17, 2009:

"...In many regions, the Navy plans to increase the number of its exercises or expand the areas in which they may occur, and virtually every coastal state will be affected. Some exercises may occur in the nation's most biologically sensitive marine habitats, including National Marine Sanctuaries and breeding habitat for the endangered North Atlantic right
whale. In all, the Navy anticipates more than 2.3 million takes (significant disruptions in marine mammal foraging, breeding, and other essential behaviors) per year, or 11.7 million takes over the course of a five-year permit..."

Please note that NOAA is receiving funding from the Navy and has been issuing permits for the U.S. Navy to proceed with these warfare programs with limited mitigation measures in place. It should also be noted that most studies being conducted at this time are allegedly funded by the Navy with their participation. The ability of NOAA working as a funded partner with the Navy leads one to believed that their test results will be biased in favor of the Navy.

Our oceans and ocean life are already in trouble and now the U.S. Navy and Air Force warfare testing will create a crisis destroying not only sea life, habitat, fish, mammals, birds, and more for years into the future. When you also add the ocean geoengineering schemes to this mix (like ongoing and unregulated iron ocean fertilization, commercial whaling and other programs), we will lose this vital resouce and its inhabitants. (See the Geoengineering Section of this website.)

Posted by Jeff Wefferson at 9:54 PM