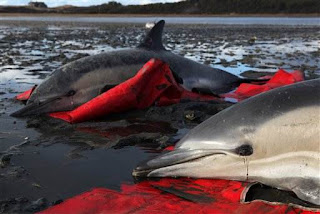 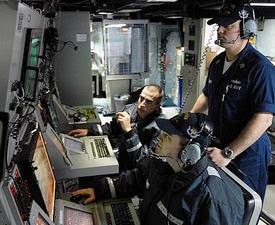 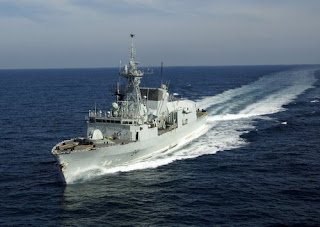 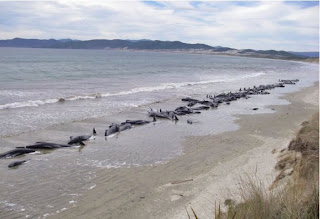 NOTE FROM JEFF: Important to note that Dr. Carlos Yapien in Peru has just changed his story in the last 24 hours, from reporting that the stranding of 264 dolphins may have been caused by seismic exploration TO NOW that only 17 dolphins stranded AND seismic exploration was NOT involved...it is now dynamite used by fishermen. He's sure about all this now.

I continue here with updates relating to our friends in the sea, the whales and dolphins. At least 264 bottle-nosed dolphins (Flippers) have stranded on the coast of Peru in the past few days.

The dead dolphins were found over a 103 kilometre stretch of sandy beach, said Edward Barriga, an official with Peru's Oceanic Institute (IMARPE).

"We have taken samples to determine the cause of death," said Barriga, speaking from the city of Lambayeque, adding that vast quantities of dead anchovies had also been found in the region.

The dolphins may have been killed by the impact of off-shore oil exploration and drilling in the region, said Carlos Yaipen with ORCA, a non-governmental group that focuses helping ocean creatures in the south Pacific.

The head of a Lambayeque group representing aquafarmers, Jorge Cabrejos, said the anchovies appear to have eaten contaminated plankton, which then sickened the dolphins that ate the small fish.

I'm going to try to contact Yaipen in Peru. Note the 'group representing aquafarmers' is providing the ubiquitous 'other' reason, 'other' than sonar or seismic exploration...and THIS ONE sounds suspiciously similar to the Christchurch City Council's reason for the bird deaths: 'avian botulism.'

THIS JUST IN: William Rossiter of The Cetacean Society International contacted Dr. Yapien and NOW all of a sudden...guess what...THE STORY HAS CHANGED. Now there's ONLY 17 dolphins and OIL COMPANIES WERE NOT INVOLVED...he knows this FOR SURE...just like Commander Van Will 'had faith' that no cetaceans were affected by his sonar blasts. Yapien was travelling with Reuters people...and who is Reuters? One of the top TWO 'news' services in the world..supplying 'news' to millions of outlets. Translation: they ARE voice of the New World Order globalist agenda in which all-things-military, all-things-hydrocarbon, all-things-nuclear and all-things-toxic are actually 'safe, clean, green and there to help you.'

I just returned last night from the stranding site. Several key findings. I travelled with the personnel of Reuters International (Press Agency) and it is going to be a press release tomorrow. There were not 260+ stranded dolphins. In our survey over 100 Kms between San Jose and Morrope in Lambayeque State, we just found 17 dolphins.

We know that the use of dynamite is common among fishermen, and that fishermen are taking the meat of the stranded dolphins. This could be the cause of death of the animals...however, the signs do not correspond to that of explosive impact in their bodies. We talked today with people from the oil company and they say they haven't performed any seismic exploration in the area this month. However, here in Peru these companies doesn't need to do the seismic assessment themselves.

A Canadian Navy frigate used sonar in the enclosed waters of Juan de Fuca Strait this week, but marine mammals were not endangered, says the ship’s commanding officer.

Cmdr. Scott Van Will, HMCS Ottawa CO, said checks ensured no marine mammals were in the area before low-frequency sonar was used as part of an anti-submarine warfare exercise.

“We have procedures in place. The marine mammal mitigation policy started in 2008 and that pretty much orders me to take some specific steps,” Van Will said.

That includes visual and sound checks which pick up everything from whales to porpoises within a 3,660 metre range, he said.

“I have faith no marine mammals were in the area at that time.”

But whale monitoring and environmental groups say sonar should never be used in the area designated by the U.S and Canada as critical habitat for endangered southern resident killer whales.

WHAT KIND OF FRACKING CRAP IS THIS??? This whole thing smacks of being a form of ritualized mass-murder FAR more than anything MDNAsty can dress up for. The Navy commander 'has faith' that no marine mammals were around...but he WASN'T SURE.

A range of 3660 meters is NOTHING for low or medium-frequency sonar...we already know that these technologies create a 'kill zone the size of Texas.'

Here is an informative video from NRDC about LFA-sonar:

On Monday morning, a Canadian Navy frigate ran a sonar exercise in the waters of Haro Strait and the Strait of Juan de Fuca, Washington. Incredibly, a good portion of that exercise took place on the U.S. side of the border – in waters we have designated as critical habitat for killer whales under the Endangered Species Act.

MORE FRACKING CRAP FROM MICHAEL JASNY OF NRDC: these people spend most of their time soliciting money then give the Navy a wee little wrist-slap. "Now you boys DON'T DO THAT AGAIN ok or else..." "Or else" what...we'll SLAP YOUR LITTLE WRIST AGAIN! Jasny proclaims that "NRDC will appeal to both the Canadian and U.S. governments to ensure that this patently dangerous activity does not happen in this place again."

BULLSHIT. The Navy ALREADY DID IT AGAIN THIS TIME...how can a bunch of people at desks in Washington D.C STOP THE U.S. AND CANADIAN NAVIES FROM DOING ANYTHING THEY PLEASE?

They CAN'T. But they CAN give us the impression that they are doing something about it. Note that the NRDC CONTINUES to have 'global warming' as one of it's top 'enemies' to combat.

Finally, note that the REAL reason LFA-Sonar exists is NOT 'to detect quiet submarines' but to protect naval assets while conducting covert operations in areas where they are not supposed to be.

"The Navy's claim is that SURTASS LFA will allow a fleet to detect even the quietest submarines as they lie on the bottom of the ocean waiting to ambush unsuspecting aircraft carriers...

But of more than three dozen mentions of SURTASS LFA in leading defense trade publications since 1990, none have described the system as a counter to quiet subs in the open ocean. The US Navy wants SURTASS LFA for use in littoral (coastal) anti-submarine (ASW) warfare to protect its ships and crew during interventions in foreign lands, where losing even one Navy sailor may prove politically damaging. And this expensive political cover may come at the expense of the health of marine mammals and other wildlife worldwide."

Posted by Jeff Wefferson at 2:13 PM